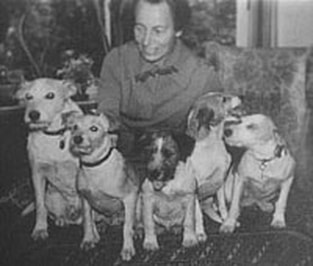 History of the Kromfohrlander

During the desperation and cruelty of World War 2 in France, most people could not afford to keep pets. The war lasted for 6 years and in this time, thousands of pets ran free or were killed (and sometimes eaten). Somehow, a little dog survived to be adopted by a US Troop crossing over from France into Germany at the end of the war.
Like many dogs born out on their own during the war, "Pieter" was the product of generations of multiple mixed dogs that descended from actual breeds that existed in that region of France at the time, These were the dogs that would have had the skills to evade danger, survive and were healthy enough to breed, all on their own.
There are not  many kinds of dogs that fit this description but likely breeds that existed in northeast France at the time would include beagles, poodles, schnauzers, white terriers, briquet vendeén, brittanys, spaniels and herding breeds such as berger picards and pyrenean shepherds.*
[*My own research at our the US National Archives in Washington, D.C. of thousands of professional WW2 photos (taken by Look and Life magazine photographers) has shown many dogs like Pieter in various troops all over the world during the war!] 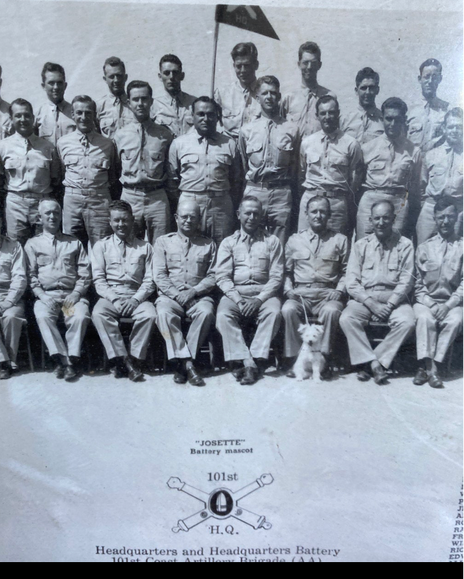 "Josi/Josette" Battery mascot in the 101st Coast Artillery Brigade (Sydney, Australia, 1942)
The Kromfohrlander displays the physical traits of a typical classic mixed breed with the easy-dry rough coat, beard and piebald coloring (which act as heat collection spots near vital organs), all good for surviving on its own.
Pieter was adopted by Ilse Schleifenbaum, on the Germany side. She was married to an attorney near Siegen, Germany in the state of North-Westphalia. After a couple of by-chance breedings to local females produced copies of their father, Mrs. Schliefenbaum decided to create a companion breed. She got a lot of help from her breeder friend Otto Borner. He helped to rebuild the German Kennel Club (VDH) after the war and he loved the idea of a establishing a new German breed. It took 10 years until the FCI recognized the Kromfohrlander as a breed (in 1955).
Nearly 70 years later, the gene pool remains quite scarce as it was originally (until 1962) limited to only West Germany (the Berlin Wall fell in 1989) and that the main goal of the original club has always been breeding a healthy dog with 'steadfastness of character.'
The Kromfohrlander has been affected in recent times by serious health issues that have limited breeding even more. DNA tests for hyperkeratosis and von Willebrands 1 have made a responsible breeder's work ever more selective.
The covid pandemic has also drastically affected the available dogs from which to breed.  It was impossible to travel over country lines to breed or get new dogs or puppies (if there were any), it was impossible to socialize puppies outside the home, the breeding age dogs kept getting older- and, most importantly, many people re-evaluated their lives and wanted to do other things besides breeding and just stopped doing it.
Artificial insemination is a very expensive possibility that most breeders in Europe do not wish to do (the general attitude I have heard through the years- with other breeds- was that dogs will lose their ability or instinct to breed naturally, which sounds silly). We are faced with the reality of a limited gene pool in the USA after only having since 2012 in gradually going over to get puppies and building here.
Responsible breeders accept the fact that we are now going into a period of slowing down, due to the factors described above. The breed will still make it to American Kennel Club's Miscellaneous class in 2023 and we shall be able to show the dogs we have in that class for many years going forward.
During this time, I believe new, cooperative fanciers with positive attitudes that treat each other fairly will appear both in Europe and here and bring the breed into a healthy existence moving forward. It will never be as common as the border collie, golden retriever or jack russell terrier but working with an ultra-rare breed has never been something a responsible breeder can put on fast-forward.
​​